Photography on site at the foundry in Oxfordshire by Dan Stevens 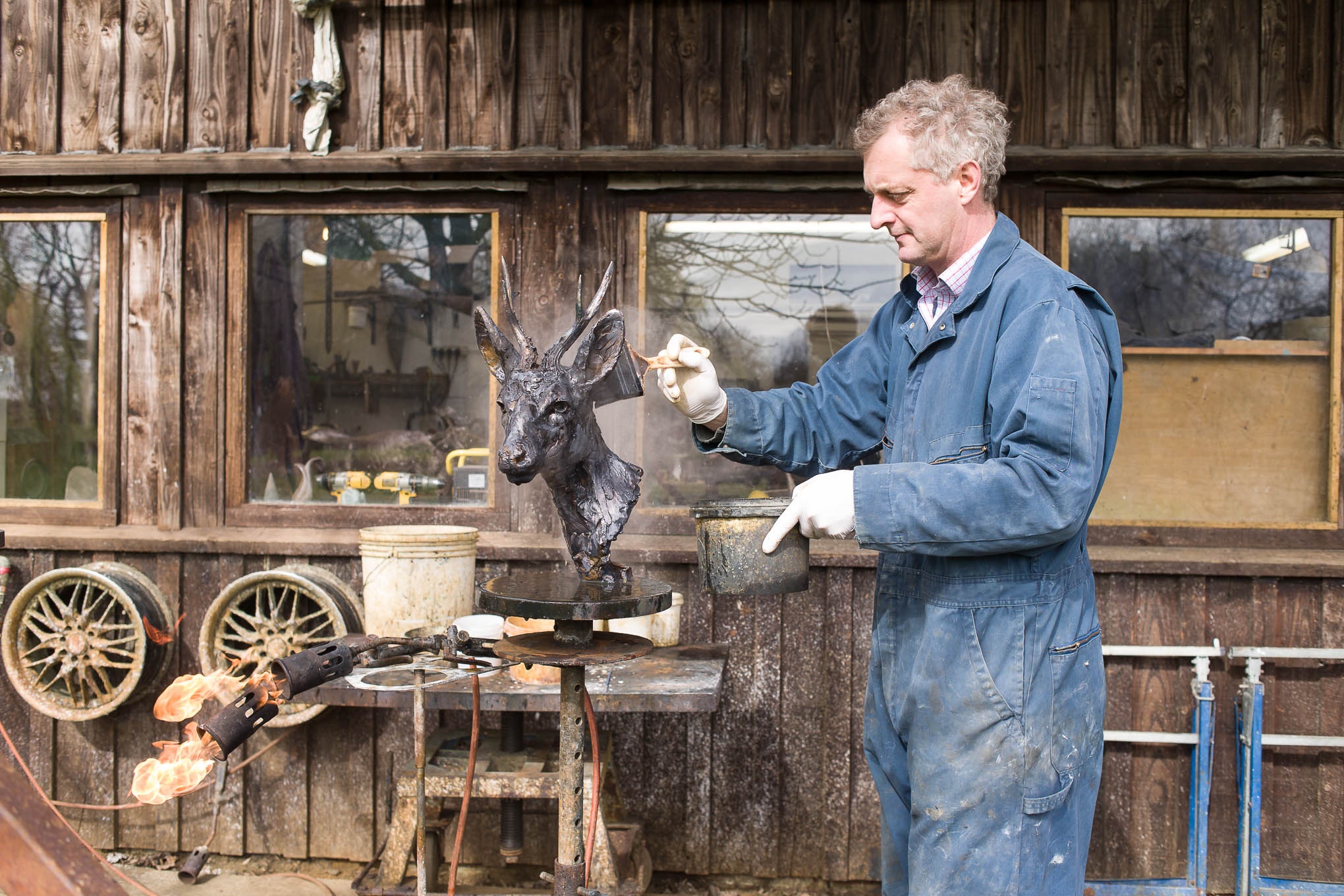 “Sorry, can I call you back I’ve got a tractor just arrived who’s delivering a horse”. It turns out later that this is one of his spectacular, bronze sculptures of an Andalucian Stallion which is going off to be placed at Stowe House. When he calls me back, we clear up the confusion – no not a real live horse - and laugh about how every artist needs a tractor.  The quick-speaking, energetic and affable Mackie then begins to shares his thoughts on taking part in GOOD NATURE.

Hamish Mackie is an artist who doesn’t skate on top of nature, he is deeply rooted in it, experiencing and in contact with it on a daily basis. He grew up on a farm in Cornwall and has the practical knowledge of what it is to be part of and survive in nature.  He tells me of early memories of a cockerel’s death where he became mesmerised by the anatomy of the bird, and was moved to sculpt it at school. He tells too the tale of a calf with a twisted gut that his father gave him responsibility to care for and rehabilitate. The 12 year old Mackie remembers fondly how the calf would follow him all over the farm, even up to the top of the hay stacks – ‘besties’ he says. 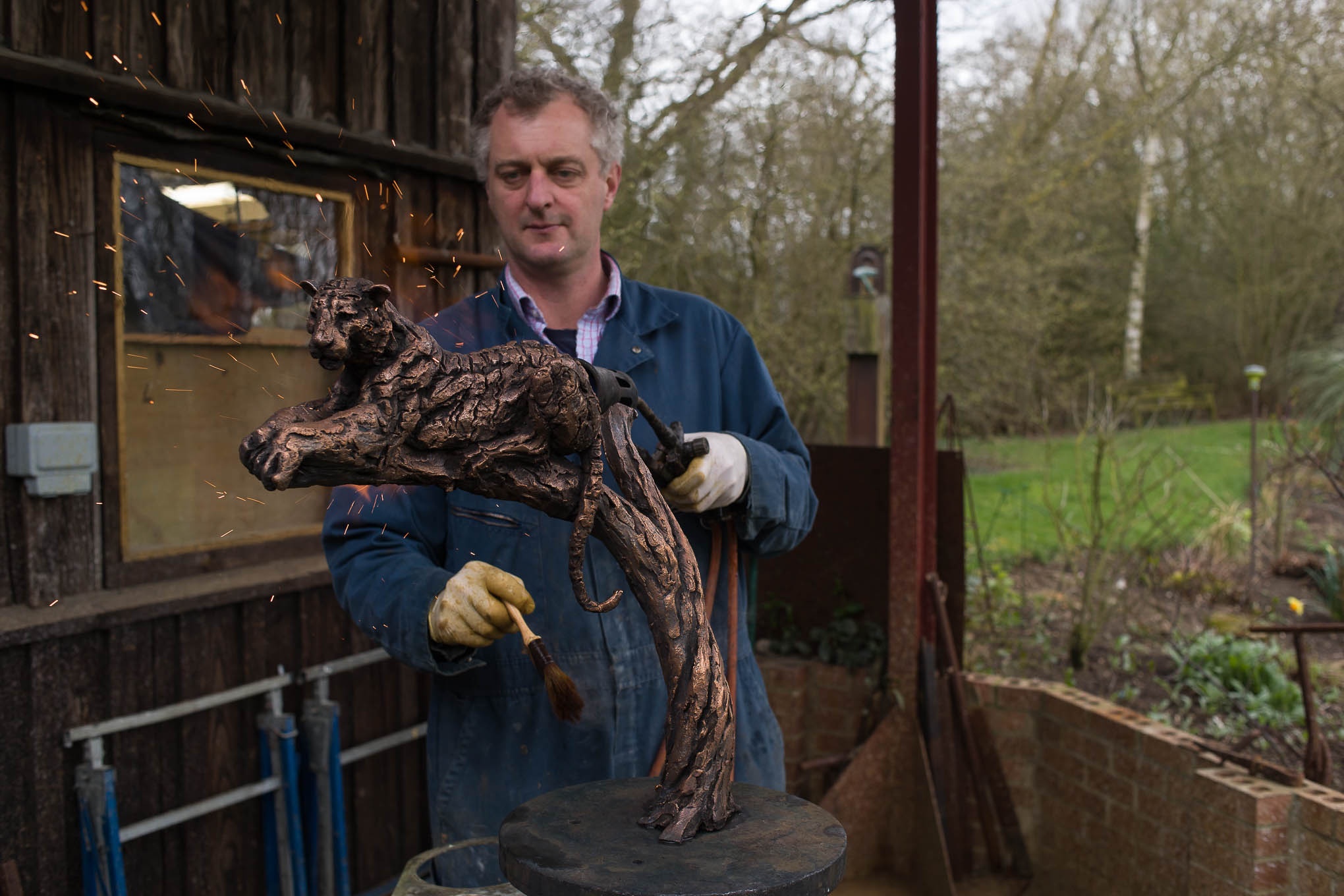 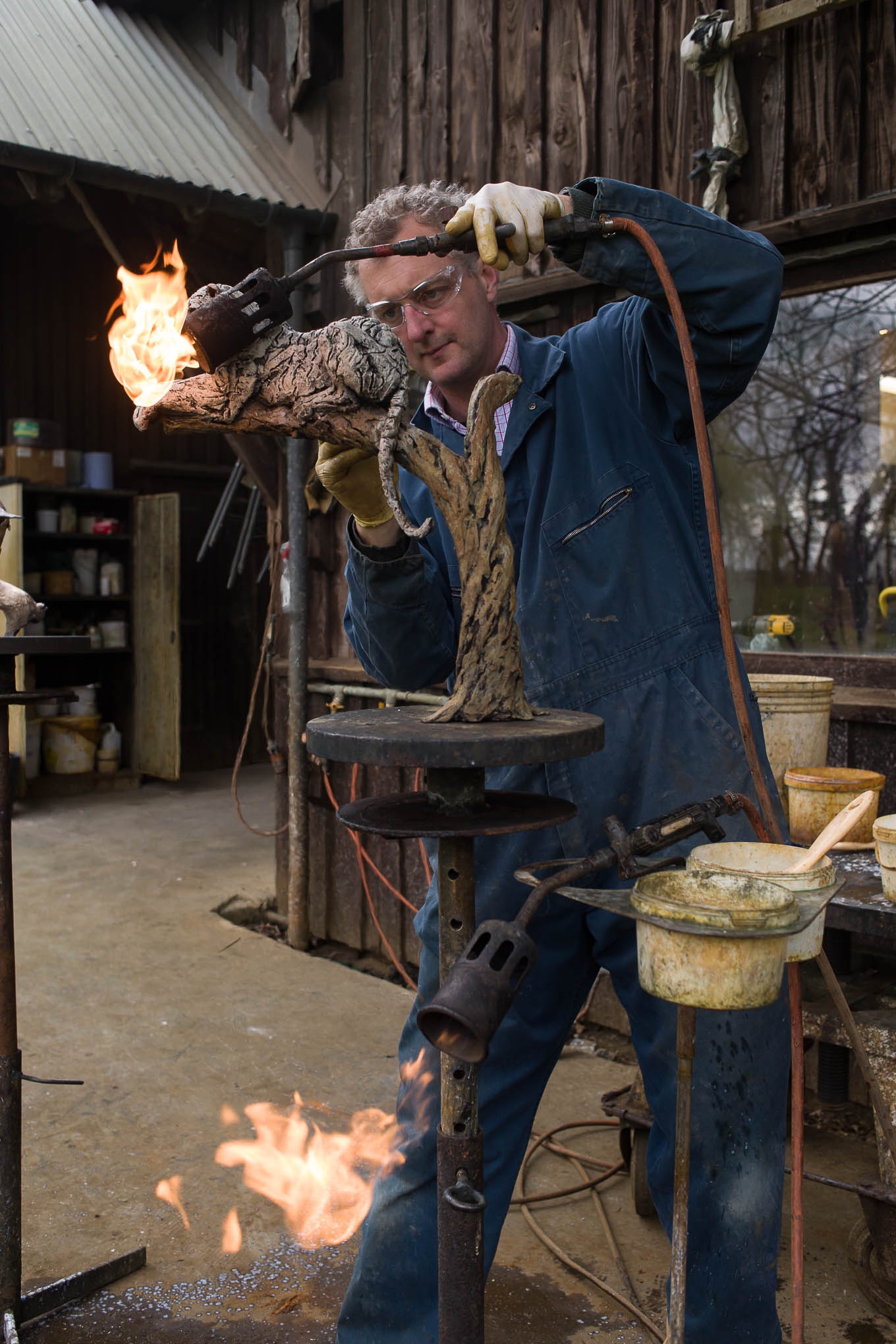 Later, his fascination with wildlife grew and became the major influence for his work as sculptor. Since 1998 he has travelled widely to observe, draw and sculpt wildlife in some of the world’s most remote landscapes. He lists Africa, Australia and Antartica as continents he visits to observe a vast array of wildlife.  He is a 21st century explorer with an aim to capture a moment of a wild creature’s existence in its own environment.

This is something Mackie considers himself lucky to be able to do. Artists in the past would have to go to the zoo but now he can observe animals in the raw, living and responding to the natural world around them.  He sees the landscapes as fundamental to how an animal exists and survives. Both co-exist and when it is correct “Nature is nature” he states “It is neither good nor bad, it just is”. The essence of his work is capturing this honest, if fleeting, moment. 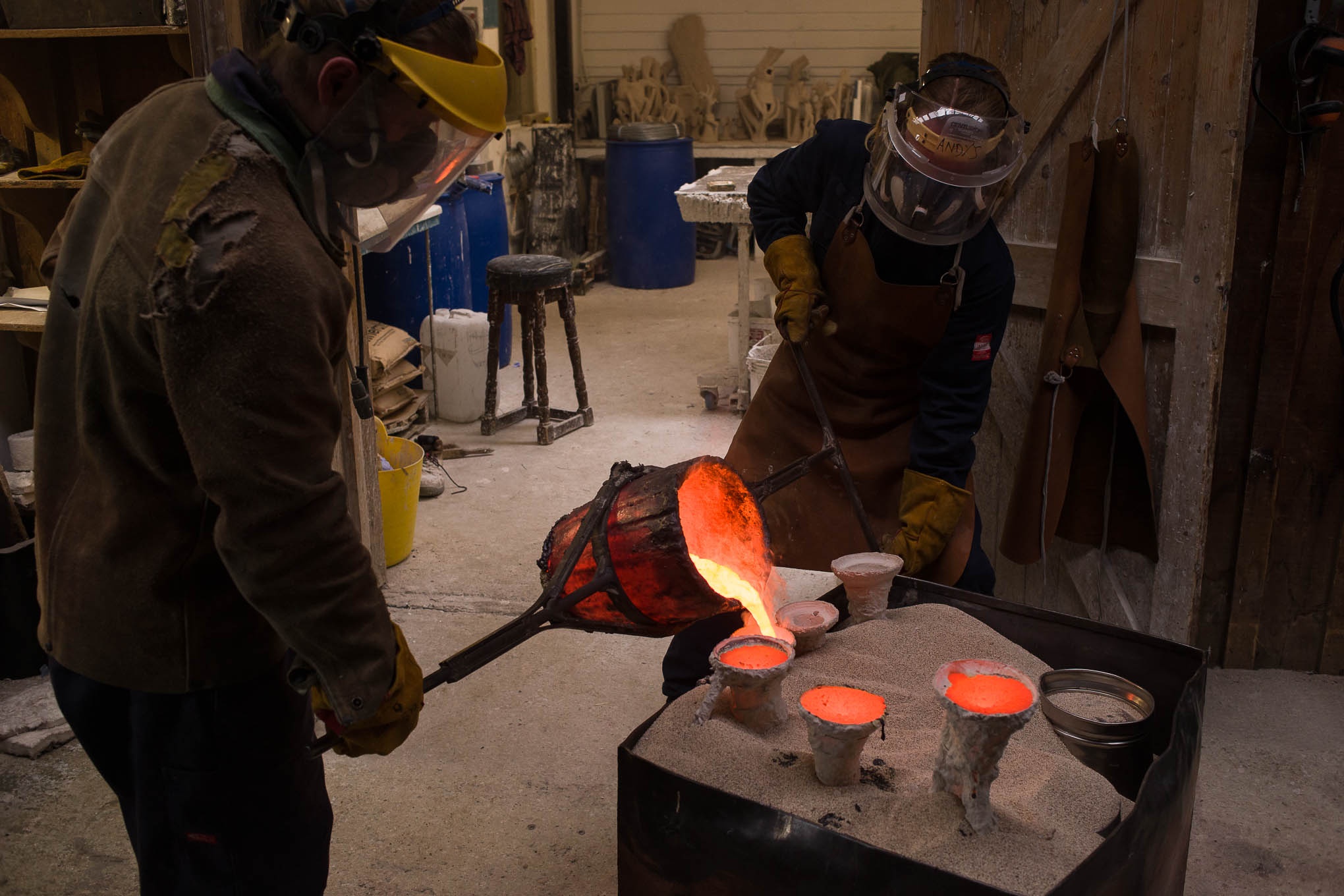 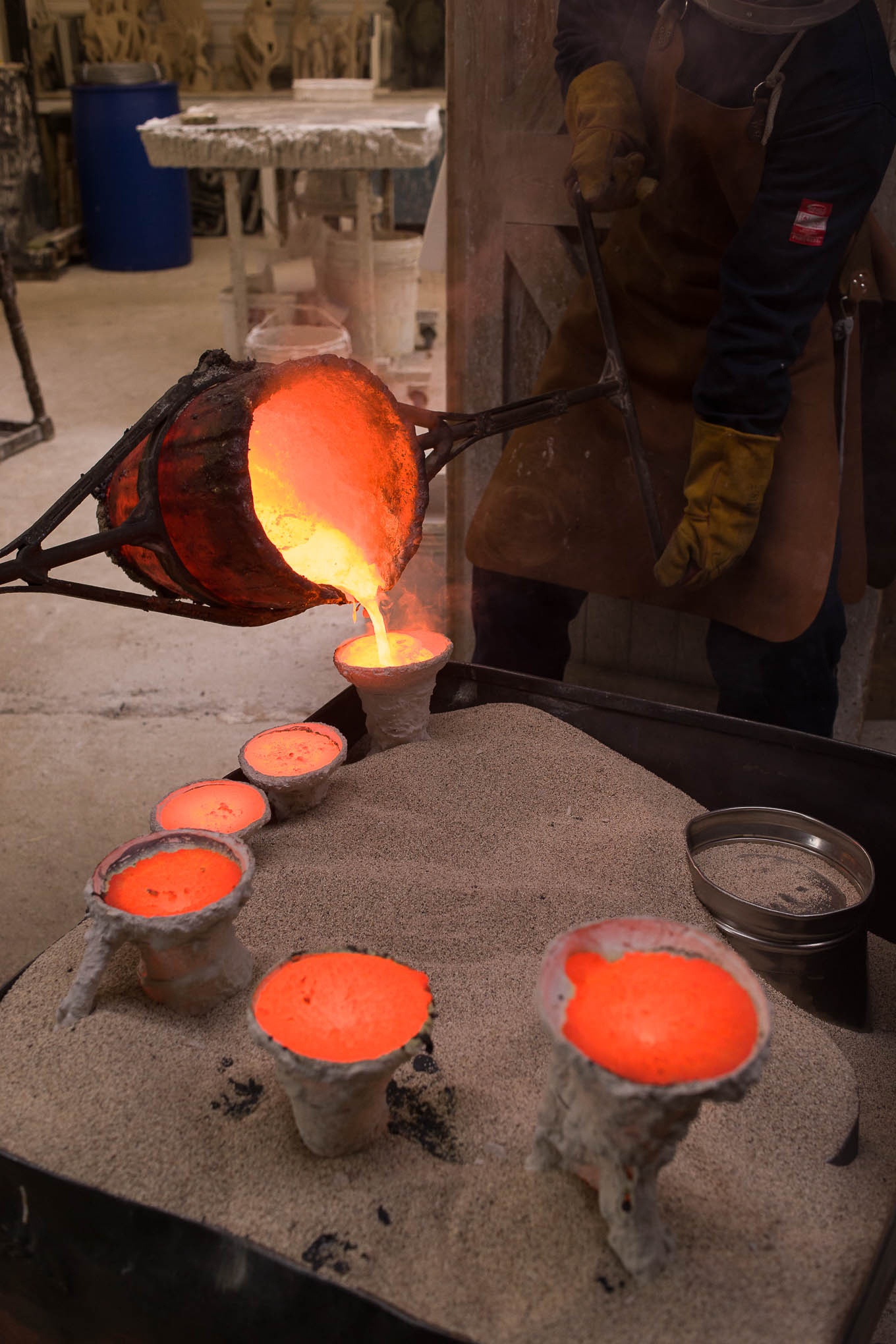 He is not apologetic in that he believes there is a need to conserve the wildlife and natural kingdoms. He talks about his long and deep interest in the elephants he has observed in Liuwa, Africa. He comments that huge strides have been made in environmental practice from the days when he first travelled there over 20 years ago. Then they were unreconstructed cattle farms, driven by commerce. Now those farms have become environmentally focused, empowered to conserve and protect. TUSK is an organization that he has always supported, driven by his experiences and observations of human and wildlife in conflict there.

The natural world outside our shores may seem spectacular with its powerful tigers, lions and rhinos but he comments that there are wonders close to home too.  We talk of his recent trip to the Isle of Ulver, where he took time to study deer.

His piece for GOOD NATURE is a pair of boxing hares. For him, hares are an enduring and much loved image of the English landscape and one that is as important to him as the elephants in Lowea.

He tells me that he regularly re-visits the subject, attracted by their dynamism and athletic shapes. “I use my interpretations of hares as a benchmark for my artistic development and technical scope”.  This piece has provided him with an opportunity to ‘take bronze casting to its structural limits’. The light-footed hares are mid-kick with limbs only contacted in two places. 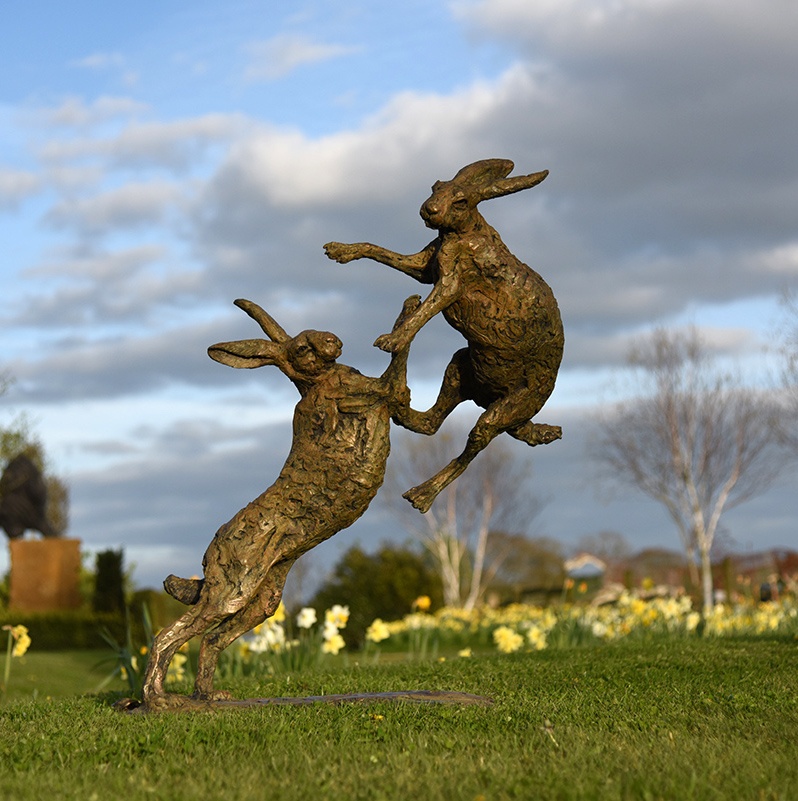 I ask him if the he thinks artists have a role in bringing nature to our attention and highlighting its shifting affects. “Yes” he simply states. Artists have long taken inspiration from nature and the natural world and without it there wouldn’t be a channel through which to create. He feels they have a duty of care to reveal its beauty and fragility. In doing so the next generation too can find inspiration - “It would be criminal to let it go on our watch” he says.

He does though hold out some hope for the future and thinks that the human race is slowly waking up to the realities and consequences of preserving nature.  For him, the demands of his studio and the making   of work in the foundry have meant that he cherishes his time in the wild all the more. In his view there’s too much rushing today and it can mean we miss out on what’s going on in the environment. Humans need to get back to the place they originated and take stock. 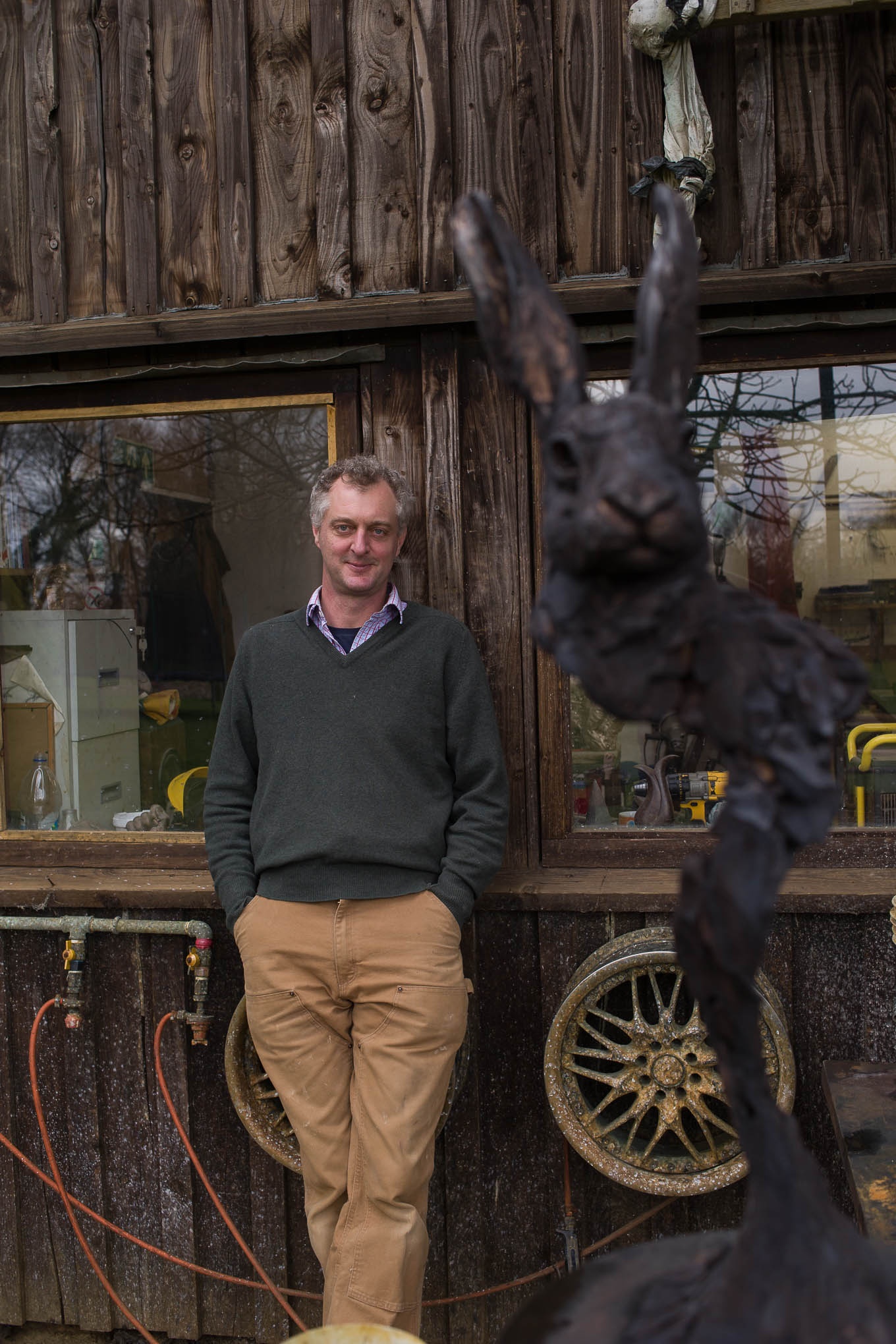